I am Val Glinskiy, network engineer specializing in data center networks. TIME magazine selected me as Person of the Year in 2006.

I have unenviable task to drag legacy application to 21st century. I am talking about 80-the legacy and some of its functions do not even use IP protocols. One of the proposed solution included 2 servers with the same 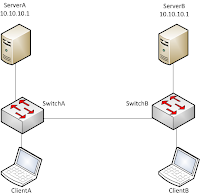 IP and MAC addresses (I know, but splitting network in 2 separate VLANs was not an option) connected to different switches, but in the same VLAN. ClientA and ClientB should be able to talk to each other and server connected to the same switch as client. ServerA and ServerB should not even know about each other's existence, so they won't complain about duplicate IP address. The switches are Cisco 6500s. One of the obvious  solutions is to put Port Access Control List on either side of the inter-switch link. PACL successfully blocked the traffic between servers, but switches still learned MAC address of the blocked traffic source and placed it MAC address table. This would cause MAC address flapping on the switch every time clients send ARP query for server's MAC or when both servers need to send traffic to their clients. Why would switch need to keep MAC address of the discarded traffic? Oh, well. Another network mystery.
Posted by V. Glinskiy at 1:25 PM No comments: Links to this post

Email ThisBlogThis!Share to TwitterShare to FacebookShare to Pinterest
Labels: Cisco

Let's say you need to configure Private VLAN on Cisco Nexus switch with MSTP. You create new VLAN, make it isolated and map it to primary VLAN. Your newly created VLAN is automatically mapped to MST0 and if your primary happened to be in any other MST instance there is a possibility that your primary and secondary VLANs ended up with different L2 paths. As a bonus, you get
annoying message "These secondary vlans are not mapped to the same instance as their primary" every time you run "show spanning-tree configuration". Not a big deal, but things like these irritate me. Not to worry, "private-vlan syncronize" under "spanning-tree mst configuration" will automatically map all secondary VLANs to the same MST instance as primary VLAN. The moment it's done, you MST digest changes and boom, you have brand new MST region and STP convergence on top of it. So, either pick exiting VLAN mapped to the same instance and convert to secondary community or isolated VLAN, or have all your VLANs mapped to MST0 and use other methods to load-share traffic between transit links.
I know what you are thinking. No, I did it in the lab, so you won't have to.
Posted by V. Glinskiy at 5:44 PM No comments: Links to this post